A: Congress approved $1.6 billion to replace existing barriers and add some fencing in new areas. The new barriers are not concrete and not like any of Trump’s wall prototypes.

Has Trump started building the wall between USA & Mexico?

Since the omnibus spending bill for fiscal year 2018 passed in late March, President Donald Trump has repeatedly claimed his long-promised wall is now under construction.

“We’ve started building the wall,” he proclaimed in remarks with Baltic leaders on April 3.

By contrast, Republican Rep. Jim Jordan, founder of the House Freedom Caucus, said of the omnibus bill, “The one thing we don’t fund is the one issue we all campaigned on — a border security wall — and that is not in the legislation.”

And here’s House Democratic Leader Nancy Pelosi’s version of what the bill does: “Democrats won explicit language restricting border construction to the same see-through fencing that was already authorized under current law.”

Those seemingly conflicting statements may lead to some confusion. One of our readers asked, “Has Trump started building the wall between USA & Mexico?”

The short answer is that the omnibus bill funds some new fencing, though far less than Trump had hoped it would. The new barriers are also not the kind of solid, concrete wall Trump once described during the campaign. Nor is it anything like any of the prototypes Trump visited in mid-March.

Trump and others in his administration are calling what is going up “the wall.” The omnibus describes it as “fencing.” Some may say that’s a matter of semantics, and indeed many officials and journalists use the terms interchangeably. But Trump has often insisted there is a difference between a fence and wall, and that he’d be building a wall.

Finally, Trump officials say the omnibus will fund about 100 miles of “new” wall, but most of that is replacing existing border fencing deemed inadequate or dilapidated.

Let’s take a deeper look at what the bill does and does not fund for barriers along the border with Mexico. And then let’s dig deeper into what Trump promised.

What’s in the Omnibus?

On March 23, Trump signed the $1.3 trillion omnibus spending bill (also known as the Consolidated Appropriations Act, 2018), though he said there “are a lot of things that I’m unhappy about in this bill.”

Although Trump had asked for $25 billion for wall construction, the bipartisan spending bill provides what Trump called only an “initial down payment” of $1.6 billion in funding. But even that sum comes with significant strings attached.

The bill further states that the money can only be used to build “operationally effective designs deployed as of the date of the Consolidated Appropriations Act, 2017, [May 5, 2017] such as currently deployed steel bollard designs, that prioritize agent safety.”

Readers may recall Trump on March 13 toured eight wall prototypes — which you can see here — that he had put out to bid early in his presidency. The language in the omnibus bill precludes funding for any of those designs.

In a March 30 briefing, Customs and Border Protection Acting Deputy Commissioner Ronald D. Vitiello said the spending bill will fund about 100 miles of “border wall system,” though he added that “does not fully fund our needs in the most critical locations.”

According to Vitiello, the construction near San Diego will include 14 miles of “new border wall,” replacing “old, dilapidated [Vietnam War-era helicopter] landing mats in favor of a steel bollard wall” and replacing 14 miles of secondary barriers.

Vitiello said the government will build four miles of new border wall in El Paso, Texas, and 35 new gates along a 55-mile stretch of existing border wall in the Rio Grande Valley.

Finally, Vitiello said, the Department of Homeland Security will replace 47 miles of “dilapidated border fencing with new border wall system in various locations along the southwest border.” Also in the Rio Grande Valley, he said, it plans to build 25 miles of new levee wall in Hidalgo County, and eight miles of “new border wall system” in Starr County, Texas. All of that is made possible by funding in the 2018 spending bill, he said.

By our count, that comes to less than 40 miles of new barrier where there wasn’t any before.

Although most of the new barrier will replace old or ineffective fencing, Vitiello said, “I would say that it’s all new because there’s a different design going in. It’s replacing stuff that is unsuitable, the dilapidated wall, this old landing mat fence. It doesn’t serve our needs anymore.”

The president would ultimately like to have 1,000 miles of barrier, Vitiello said, and there is currently 654 miles of fencing. So the funding bill leaves the president well short of his goal.

On March 28, Trump tweeted photos from a briefing “on the start of our Southern Border WALL!” 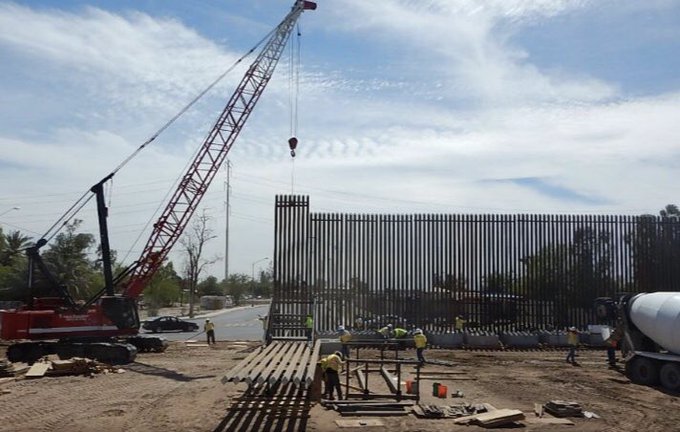 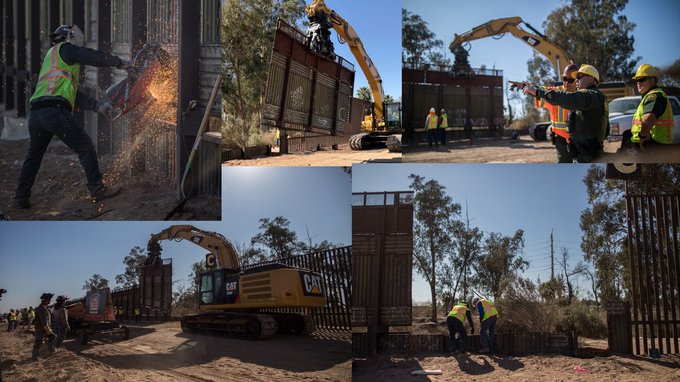 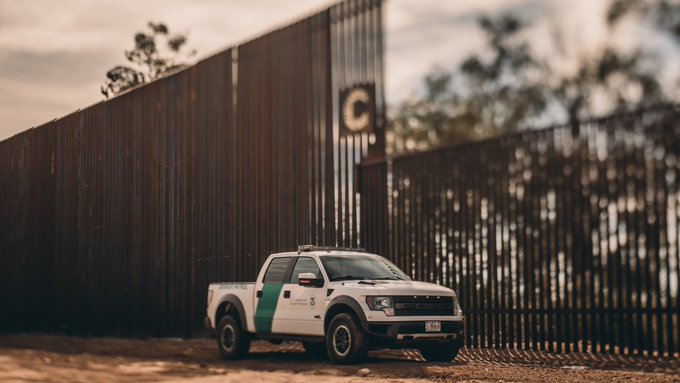 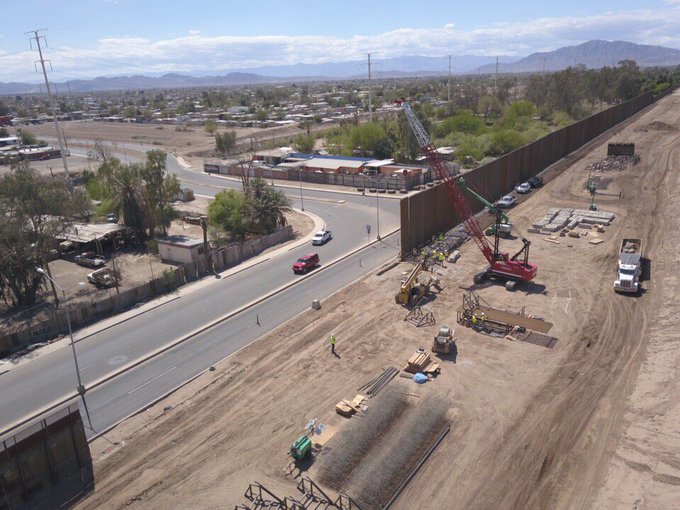 Great briefing this afternoon on the start of our Southern Border WALL!

That raises the question, though: Is the barrier funded through the omnibus a wall or a fence? At one time, that distinction was important to Trump.

According to Vocabulary.com, “The difference between a fence and a wall is that you can almost always see through a fence, at least to some degree, while a wall is solid.”

If that’s the case, then what is going up is fence. But, to be fair, many politicians, media figures and even border experts often use the terms wall and fence interchangeably.

And so has Trump — at times.

By the time Trump announced his candidacy for president on June 16, 2015, he had settled on the nomenclature: wall.

Trump, June 16: I would build a great wall, and nobody builds walls better than me, believe me, and I’ll build them very inexpensively, I will build a great, great wall on our southern border. And I will have Mexico pay for that wall. Mark my words.

Two days later, in an interview on Fox News, Sean Hannity said, “You said you — you would build a fence — nobody could build a better fence than Donald Trump.”

In August of that year, Trump again stressed that he was proposing a wall, not a fence, as he made very clear in a tweet attacking Republican primary opponent Jeb Bush, who criticized Trump’s plan for a border “fence.” “It’s not a fence, Jeb,” he wrote. “It’s a WALL, and there’s a BIG difference!”

Jeb Bush just talked about my border proposal to build a “fence.” It’s not a fence, Jeb, it’s a WALL, and there’s a BIG difference!

So Trump saw a difference between fences and walls. But he did not explain exactly what those differences were.

We could find only one instance where he described the details of the wall as a solid structure, as he described laying down “precast planks.” It came during a campaign speechin August 2015 in New Hampshire. It’s height? Trump pointed to the ceiling of the auditorium and said, “Higher.”

Trump, Aug. 19, 2015:  I will build the greatest wall that you’ve ever seen. … I already know what it should look like. … Did you ever see precast plank for parking garages? OK, as an example. … So you take precast plank. It comes 30 feet long, 40 feet long, 50 feet long. You see the highways where they can span 50, 60 feet, even longer than that, right? And you do a beautiful, nice precast plank with beautiful everything. … You put that plank up and you dig your footings. And you put that plank up — there’s no ladder going over that. If they ever go up there, they’re in trouble, because here’s no way to get down. Maybe a rope.

In a “60 Minutes” interview shortly after his election, Trump continued to distinguish between walls and fences, and allowed that fences might be appropriate in places.

Lesley Stahl, Nov. 13, 2016: So let’s go through very quickly some of the promises you made and tell us if you’re going to do what you said or you’re going to change it in any way. Are you really going to build a wall?

Stahl: They’re talking about a fence in the Republican Congress, would you accept a fence?

Trump: For certain areas I would, but certain areas, a wall is more appropriate. I’m very good at this, it’s called construction.

That summer, Trump began talking about the need to be able to see through the wall.

Speaking with reporters on Air Force One on July 14, 2017, Trump said, “One of the things with the wall is you need transparency. … You have to be able to see through it. In other words, if you can’t see through that wall — so it could be a steel wall with openings, but you have to have openings because you have to see what’s on the other side of the wall.”

In an interview on Fox News in November, Trump said the wall would be drawn from one of the prototypes, and he again stressed the need to be able to see through the wall. “You know, you think we’re going to build a nice, simple concrete wall, but it’s not that simple.”

The eight companies were ultimately chosen to build prototypes 18 to 30 feet tall. Half were made primarily of reinforced concrete; the other four were made out of “other materials.” After viewing them in March, Trump said, “some work very well; some don’t work so well. When we build, we want to build the right thing.”

Again, the funding in the omnibus appropriations bill precludes construction of the prototype designs. The bill funds about 100 miles of border barrier in various places, according to Customs and Border Protection. That’s far less than what Trump said he intends to ultimately build. And much of that is replacement for existing fencing that is dilapidated or inadequate. The spending bill funds nearly $1.6 billion worth of what it refers to as “fencing.” Trump now calls that “wall.” But he didn’t always think those were the same thing.

Mark, Michelle. “Trump is visiting the 8 prototypes for his border wall — see what they look like.” Business Insider. 13 Mar 2018.

Brody, David. The Brody File: “Exclusive: Donald Trump on Southern Border: ‘Nobody can build a fence like me.’” CBN News. 20 May 2015.

Trump’s Approval Rating On the Rise

Trump Will Speak At a Hate Group Event

‘No plan, no Q, nothing’: QAnon followers reel as Biden inaugurated
20 January 2021