Sen. Bernie Sanders and Alexandria Ocasio-Cortez, the Democratic nominee for New York’s 14th Congressional District seat, are pointing to a study they say shows “Medicare-for-all” would save Americans money. But the author of the study says they are misrepresenting his work.

The study is based on the language of a “Medicare-for-all” bill proposed by Sanders last year that makes assumptions about reduced administrative and drug costs, as well as deeply reduced reimbursement rates to health care providers under a universal health care system. But the study’s author believes those assumptions about savings are unrealistic.

Our fact-checking colleagues at the Washington Post first wrote about this when, on July 30, Sanders tweeted, “Thank you, Koch brothers, for accidentally making the case for Medicare for All!” 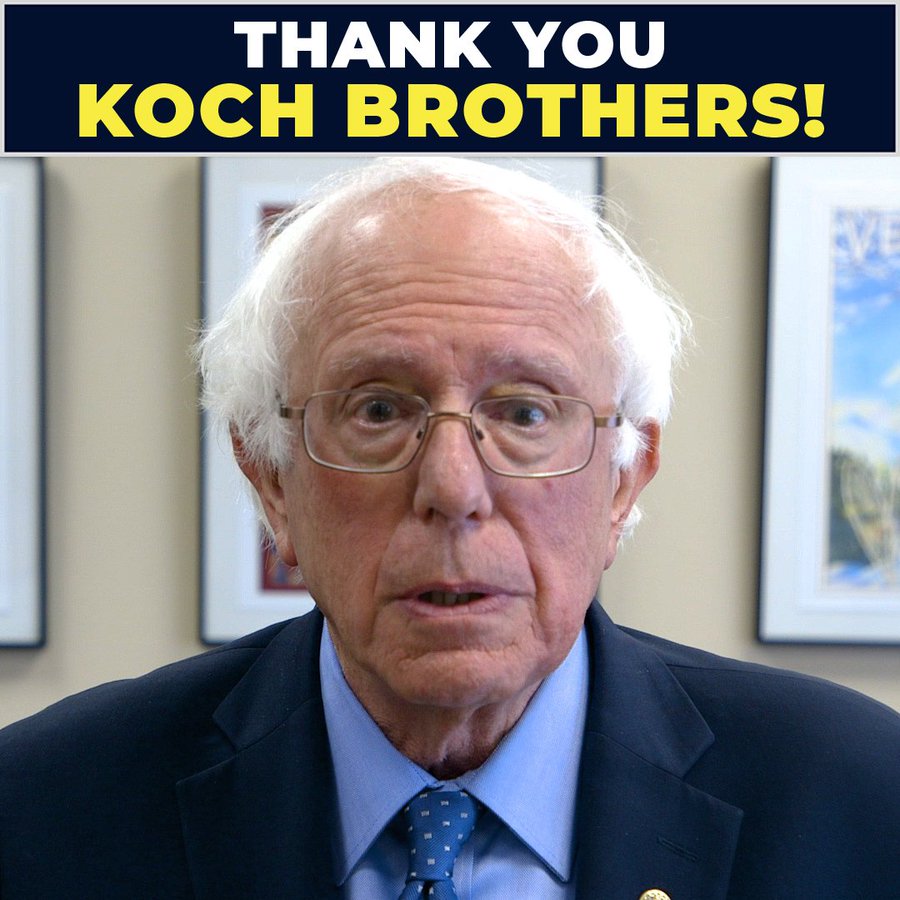 Thank you, Koch brothers, for accidentally making the case for Medicare for All!

In the accompanying video, Sanders says, “Let me thank the Koch brothers, of all people, for sponsoring a study that shows that Medicare for All would save the American people $2 trillion over a 10-year period.”

Ocasio-Cortez referenced the same study when asked by CNN’s Chris Cuomo on Aug. 8 about the cost of “Medicare-for-all.”

“First of all, the thing we need to realize is people talk about the sticker shock of Medicare-for-all. They do not talk about the sticker shock of our existing system,” Ocasio-Cortez said. “You know in a Koch brothers-funded study – if any study is going to try to be a little bit slanted it would be one funded by the Koch brothers – it shows that Medicare-for-all is actually much cheaper than the current system that we pay right now.”

Sanders and Ocasio-Cortez are referring to a working paper, “The Costs of a National Single-Payer Healthcare System,” published by the Mercatus Center at George Mason University. The Mercatus Center gets some of its funding from the libertarian Koch brothers, but more about that later.

The author of the paper, Charles Blahous, a senior research strategist at the Mercatus Center who once was the deputy director of President Bush’s National Economic Council, says the two proponents of a universal health care system are distorting the findings of his paper.

The study looked at the impact of the Medicare for All Act introduced by Sanders on Sept. 13, 2017. The bill, which has 16 Democratic cosponsors, would expand Medicare into a universal health insurance program, phased in over four years. (The bill hasn’t gone anywhere in a Republican-controlled Senate.)

The top line of the paper’s abstract says that the bill “would, under conservative estimates, increase federal budget commitments by approximately $32.6 trillion during its first 10 years of full implementation.” According to the paper, even doubling all “currently projected federal individual and corporate income tax collections would be insufficient to finance the added federal costs of the plan.”

But Sanders’ spokesman, Josh Miller-Lewis, told us that presenting only the additional governmental cost of Medicare-for-all — “the scary $32 trillion figure” — leaves out the larger context. Of course the government would spend more on health care under a Medicare-for-all system, he said, but the idea is that it would result in less spending on healthcare in the U.S. overall.

Miller-Lewis referred to figures not highlighted in the report that show that between 2022 and 2031, the currently projected cost of health care expenditures in the U.S. of $59.4 trillion would dip to $57.6 trillion under the “Medicare-for-all” plan. That’s how Sanders arrives at his claim that the study “shows that Medicare for All would save the American people $2 trillion over a 10 year period.” (See Table 2.)

In an email to FactCheck.org, Blahous said he didn’t highlight that figure because he doesn’t think it’s realistic.

As Blahous wrote in the fourth sentence of his abstract, “It is likely that the actual cost of M4A would be substantially greater than these estimates, which assume significant administrative and drug cost savings under the plan, and also assume that health care providers operating under M4A will be reimbursed at rates more than 40 percent lower than those currently paid by private health insurance.”

Blahous used the text of Sanders’ bill to guide assumptions. For example, he said, the bill says health care providers will be reimbursed for patients at Medicare payment rates. Blahous said Medicare payment rates are projected by the Centers for Medicare and Medicaid Services to be roughly 40 percent lower than those paid by private insurers, so he built those assumed savings into his estimate.

But in the report, Blahous cautions that the assumption is suspect.

Blahous, July 2018: [I]t is not precisely predictable how hospitals, physicians, and other healthcare providers would respond to a dramatic reduction in their reimbursements under M4A, well below their costs of care for all categories of patients combined. The Centers for Medicare and Medicaid Services (CMS) Office of the Actuary has projected that even upholding current-law reimbursement rates for treating Medicare beneficiaries alone would cause nearly half of all hospitals to have negative total facility margins by 2040. The same study found that by 2019, over 80 percent of hospitals will lose money treating Medicare patients — a situation M4A would extend, to a first approximation, to all US patients. Perhaps some facilities and physicians would be able to generate heretofore unachieved cost savings that would enable their continued functioning without significant disruptions. However, at least some undoubtedly would not, thereby reducing the supply of healthcare services at the same time M4A sharply increases healthcare demand. It is impossible to say precisely how much the confluence of these factors would reduce individuals’ timely access to healthcare services, but some such access problems almost certainly must arise.

Anticipating these difficulties, some other studies have assumed that M4A payment rates must exceed current-law Medicare payment rates to avoid sending facilities into deficit on average or to avoid triggering unacceptable reductions in the provision and quality of healthcare services. These alternative payment rate assumptions substantially increase the total projected costs of M4A.

Or, as Blahous told us via email, achieving a 40 percent reduction in reimbursement rates is an “unlikely outcome” and “actual costs are likely to be substantially greater.”

“To argue that we can get to that level of savings by getting rid of the health insurance middleman is inconsistent with my study,” Blahous said. “To lend credibility to the $2 trillion savings number specifically, one would have to argue that we can make those 40 percent cuts to providers at the same time as increasing demand by about 11 percent, without triggering disruptions of access to care that lawmakers and the public find unacceptable.”

The report similarly uses assumptions in the Sanders bill about savings on administrative costs and on the cost of prescription drugs. Blahous describes these assumptions as “aggressive” and his report includes arguments that suggest they are unlikely.

Said Blahous: “If you ask somebody ‘How much would something cost?’ and if they responded with, ‘Well, if you assume X the cost would be Y, but that’s an unrealistic assumption, actual costs would be higher’ – it’s not accurate to say ‘He says the cost is Y!’ When I wrote that ‘actual costs’ would be higher, I meant it. And I haven’t simply said that in response to comments like the candidate’s – I had previously put it front and center on the study itself.”

In his report, Blahous provided an alternative-scenario estimate, one that assumed instead that payments to health care providers would “remain equal on average to the current-law blend of higher private and lower public reimbursement rates.” Under that scenario, there would be a net increase in health care spending.

Sanders’ spokesman, Miller-Lewis, argues that the initial assumptions used in the report — the ones based on Sanders’ Medicare for All Act — are legitimate.

The buying power associated with a system that represents all Americans would allow the government to negotiate significant savings in payments to health care providers, as well as on drug prices, Miller-Lewis said.

“The whole point of universal health care is that you’ll get these cost-savings,” he said.

“It’s done everywhere in the world,” he said. “I don’t think we’re making any wrong assumptions.”

There is a certain amount of guesswork in estimating the cost of something as complicated as the health care system, and all of those estimates rely on a multitude of assumptions. We’re not suggesting the assumptions made in the Sanders bill are wrong, only that they aren’t Blahous’ assumptions.

“Proponents are perfectly free to argue for those provider cuts and to say that THEY believe M4A will therefore lower national health spending, — and also to cite whatever data they want in support of their arguments, from any study they find credible,” Blahous told us. “What they shouldn’t say is that I also reached that conclusion, because that’s incorrect. That finding should not be attributed to me or to my study.”

Both Sanders and Ocasio-Cortez referred to the Mercatus Center report as a “Koch brothers-funded study.” They are referring, of course, to the billionaire brothers, Charles and David Koch, who spend hundreds of millions of dollars in support of Republican candidates that support their conservative/libertarian agenda.

The Koch brothers have donated millions of dollars to George Mason University’s Mercatus Center, and Charles Koch sits on the center’s board of directors.

Documents published earlier this year show the Koch brothers, at one point at least, used their donations to gain influence over the hiring and firing of professors at the Mercatus Center. An Associated Press story about the donor agreement with the school noted, “The Koch Foundation issued a statement saying the agreements with Mason are ‘old and inactive’ and that newer agreements contain no such provisions.”

Blahous told us his work is not influenced by any donors to the Mercatus Center.

“All I’d say is that my research is totally my own,” Blahous said. “It’s academic research, it goes through a blind review process, and it represents my own work. I choose my own research subjects and follow the facts where they lead. You’d have to ask someone else about where funding comes from, I don’t follow that and it doesn’t affect me.”

We take no position on “Medicare-for-all” and we can’t say if Blahous’ study is or is not influenced by donors to the Mercatus Center. But we can say that Sanders and Ocasio-Cortez are misrepresenting the study’s conclusions.

LEFT-CENTER BIAS These media sources have a slight to moderate liberal bias.  They often publish factual information that utilizes loaded words (wording that attempts to influence an audience by appealing… [...]

Despite a growing recognition of the problem, the United States continues to see newspapers die at the rate of two per week, according to a report issued Wednesday on the… [...]

Rep. Zoe Lofgren said in an interview that aired Sunday that she is not surprised Cassidy Hutchinson’s blockbuster Jan. 6 testimony last week has come under attack from former President… [...]

Investors are greeting the third quarter with greater trepidation about a recession, and that makes next Friday’s June jobs report a potentially bigger catalyst for markets than it might otherwise… [...]