The Federal Election Commission (FEC) on Thursday rejected a rulemaking to address foreign influence in United States election spending, the third time the commission has shot down similar proposals since reports of Russian interference in the 2016 election began emerging about two years ago.

The motion, which was proposed by Vice Chair Ellen Weintraub, would have begun the process of potentially implementing new FEC rules intended to discourage foreign spending in U.S. elections. Among those possible new rules was a requirement that super PACs and other groups state they did not use money from foreign sources in U.S. elections.

The FEC’s two Republican commissioners voted against the proposal, citing a reluctance to move forward with the motion until more information about foreign election interference is released.

Foreign spending in elections is illegal, but Weintraub expressed concern about the possibility of foreign groups using dark money to tip the scales in the 2018 midterms. She urged the commission to vote for the rulemaking before the November elections.

“We are receiving information from a variety of public and private sources that indicate that we should be seriously concerned about people trying to influence the elections in 2018, and spending serious money to do it,” Weintraub said.

Thursday’s FEC vote came about a week after leaders of the bipartisan Senate Select Committee on Intelligence, which is investigating international meddling in the 2016 elections, released a statement addressing Russian interference. Sen. Richard Burr (R-N.C.), who chairs the committee, said he had “no doubt” Russia made efforts to influence the 2016 races.

Weintraub said she wanted to propose the rulemaking again because of the Senate committee’s bipartisan agreement that Russia meddled in the 2016 election.

Commissioners deadlocked on the proposal across party lines. Weintraub and Commissioner Steven Walther, both Democrats, voted in favor of the rulemaking, while FEC Chair Caroline Hunter and Commissioner Matthew Petersen, the two Republicans, voted against the motion.

Hunter and Petersen both said they wanted to wait until additional information about foreign election influence is revealed before voting on the proposal. Petersen said he could support the rulemaking in the future, but he would not vote for the proposal before the intelligence committee and other groups finish their investigations.

“There are going to be findings that are going to be issued by the (intelligence committee), and I think that I look forward to seeing what those findings are to see to what extent the efforts to interfere involve matters within our jurisdiction,” Petersen said.

The FEC has already taken some bipartisan steps to curb foreign influence in U.S. elections, Petersen said. He cited a plan passed by the FEC in March to implement stricter disclosure requirements for political ads on internet platforms like Facebook.

The federal government has also indicted foreign individuals and companies alleged to have violated laws prohibiting foreign interference in elections, he added.

After the commission rejected Weintraub’s initial rulemaking, she proposed a narrower motion which was also voted down.

In a statement Thursday afternoon, Weintraub chided the Republican commissioners who rejected the motions, saying the “time for excuses and delays is over.”

“The Director of National Intelligence (Dan Coats) is satisfied that the Russians are targeting the 2018 midterm elections, but my colleagues on the Commission are not? At this point, I frankly don’t think they would be satisfied by anything short of an FEC expenditure report personally signed by Vladimir Putin,” Weintraub said in the statement. 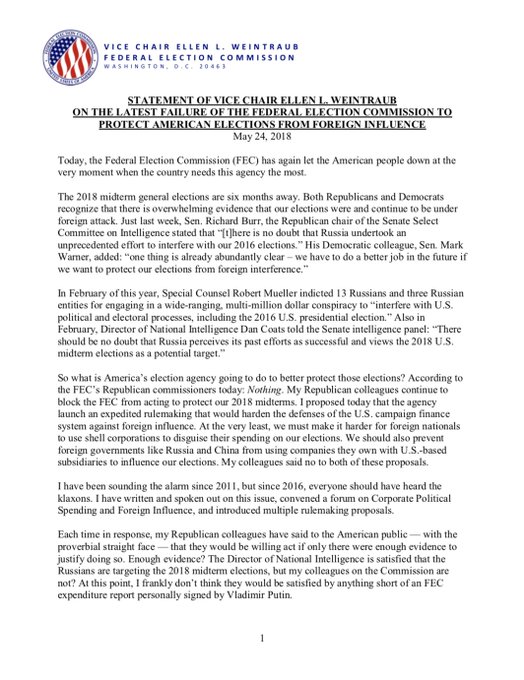 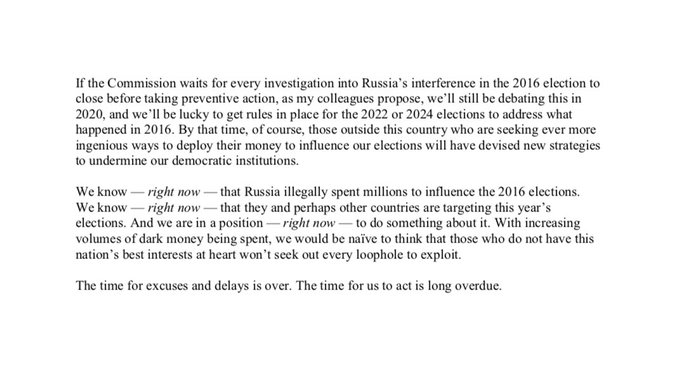 We know Russia spent millions to influence the 2016 elections and is targeting this year’s. We know @FEC can do something about it.

But when I proposed today that we launch an expedited rulemaking to harden our defenses against foreign influence, my GOP colleagues said “No.”

Most FEC rulemakings that included proposals to address concerns about foreign nationals have been rejected since 2011. The commission moved forward with revised campaign finance rules in 2014, but Weintraub objected to that motion, saying at the time it failed to sufficiently address dark money.

Only four of the six FEC commissioner positions are currently filled, and all four are serving expired terms, the Center for Public Integrity reported. The commissioners serve six-year terms, but they can remain in their positions until the president and Senate replaces them.

E-filing bill now has more support than ever

Republican Sen. Lindsey Graham of South Carolina will challenge a grand jury subpoena seeking his testimony as part of an investigation into possible criminal interference in Georgia’s 2020 election by former President Donald… [...]

The man accused of killing seven people at a Fourth of July parade confessed in detail to his alleged shooting — and revealed considerations on a second attack, authorities said Wednesday. Robert… [...]

The man accused of opening fire with a rifle from a rooftop onto a crowd of people watching a July Fourth parade near Chicago, turning the holiday celebration into another national tragedy,… [...]

Fabricated Fourth of July Tweet Was Not from Rep. Marjorie Taylor Greene
6 July 2022

Quick Take Rep. Marjorie Taylor Greene was among the many politicians who posted Fourth of July messages on social media. But a bogus, nonsensical July Fourth tweet purportedly from the… [...]

Topline Oil prices dropped 8% Tuesday—falling back below $100 per barrel for the first time since May—as some experts warn that prices could fall to as low as $60 per… [...]